MailMerge: The Append Parameter of the Merge Method Explained

The Merge method of the MailMerge class merges all records into a single document by default.

In order to access each single created document, the DataRowMerged event can be used to save the resulting, single document in this event. The event arguments DataRowMergedEventArgs return the merged document in the internal TX Text Control format that can be accessed using the MergedRow property.

The following sample shows how to use the event by merging the following simple template consisting of two merge fields:

As a data source, a simple DataSet with one DataTable is used. Before the Merge method is called with the append parameter set to false, the DataRowMerged event is attached:

In the DataRowMerged event, each merged record is loaded into a temporary ServerTextControl and saved as HTML which is then sent back to the browser using HttpResponse:

The resulting HTML shows the 3 merged records divided by an horizontal rule: 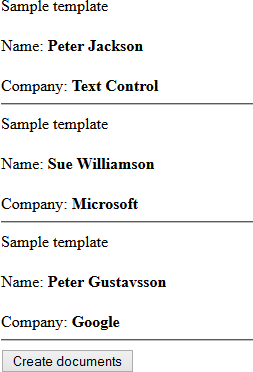 Download the sample from GitHub and test it on your own.

We proudly host our sample code on github.com/TextControl.

Requirements for This Sample

We are happy to announce the immediate availability of TX Text Control 30.0 for all platforms including ASP.NET, Windows Forms, WPF and ActiveX and TX Spell .NET 9.0 for all .NET based platforms.

A merge block repeats defined content and merge fields based on given data rows of a specific child table or object. This demo shows how to vertically merge table cells in case the content is the same.