The manufacturer of TX Text Control and Keyoti Inc. announce today a new co-operation for the development of a spell checking component. In the last few months, both companies have been working… 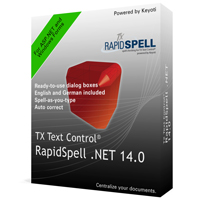 The manufacturer of TX Text Control and Keyoti Inc. announce today a new co-operation for the development of a spell checking component.

The new spell checking component ships with English and German dictionaries. Additional languages and specialist dictionaries such as medical are available. The component enables developers to integrate spell checking functionality into .NET Windows and ASP.NET applications, based on TX Text Control.

TX Spell .NET for Windows Forms includes a spell check dialog with replacement suggestions and the possibility to add new words to a custom dictionary. Additionally, 'spell-as-you-type' is fully supported and enables users to check their spelling while they are creating a document. Misspelled words can be replaced using an automatically inserted context menu.

The release is planned for the end of March 2009.

Keyoti is a software component development company based at the foot of Mount Washington on Vancouver Island, Canada. Their components and controls are regarded as some of the best in their area and are used by companies such as ABN Amro, Compuware, Keybank, Intel, Monster.com, Office of the US President, Pfizer, Royal Bank of Scotland, US Army, Vivendi Universal, and Verizon. Visit Keyoti's web site at:

We are happy to announce a partnership that gives PowerBuilder users access to the leading word processing component, TX Text Control.

The software component vendor Text Control announced the immediate availability of its latest version X13 for all platforms including ASP.NET, Windows Forms, WPF and ActiveX. The ASP.NET product…