With Visual Studio Team Services (VSTS - Azure DevOps), Microsoft offers services for teams to share code and track their work. A major feature is the continuous integration support for projects. Hosted build agents can build the projects immediately or based on your specifications. Continuous Integration (CI) is a development practice where each check-in is verified by an automated build which enables teams to detect problems at an early stage. 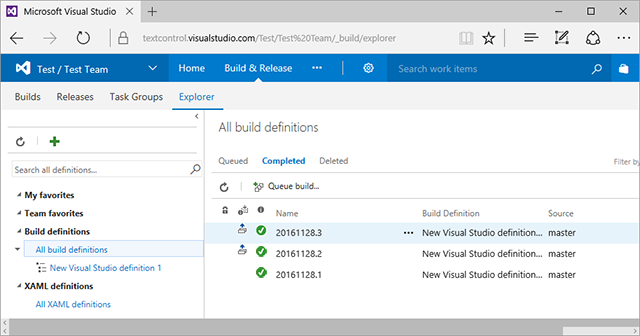 Visual Studio Team Services implement hosted build agents that can be used, in case the solution doesn't have other dependencies than these packages.

Text Control products are licensed on a per-developer basis. Each developer who uses our products must have their own, assigned license. If you are using a build server, all developers that check-in code, that uses TX Text Control classes, need their own license.

On hosted build machines provided by Visual Studio Team Services, no third-party software can be installed.

The licenses.licx must contain one of the following license entries (learn more here):

The license compiler will generate the 'MyApplication.exe.licenses' resource file. Add this file to your project as an embedded resource and remove the licenses.licx from the project.

Important: While compiling, embedded resources are prefixed with the Namespace and assembly name automatically. Remove the assembly name from the licenses resource file as shown in the screenshot below.

Additionally, add the TX Text Control assemblies to your project and set the Copy to Output Directory to Copy always. Make sure that all files listed in the documentation is copied to the output directory.

Also, make sure that the files from the Assembly\bin or Assembly\bin64 folder match the platform the build agent is compiling for (32bit or 64bit).

Please build the project explicitly for one of these platforms and not AnyCPU. 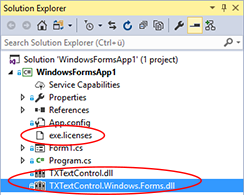 If you start build processes in Visual Studio Team Services now, they will pass without license or dependency errors.