This article describes upcoming features that will be part of the next version of TX Text Control.

We just received an internal build from our engineering with the latest versions of TX Text Control X12. The WPF version of TX Text Control is getting a complete new rendering engine. As a result of this new engine, the WPF "Airspace"-issue will be resolved. In earlier versions, the TX Text Control component (and many other components) were always rendered on top of other controls.

Thanks to the new rendering engine of TX Text Control X12, the TextControl object doesn't overlap other controls in the same scenario:

Render transforms are typically used for animating or applying an effect to an UI element in WPF. TX Text Control .NET for WPF X12 will support all transformations including rotate, skew and flip.

The following screenshot shows a rotated TextControl object on a Window:

An Adorner is a FrameworkElement that is bound to an UIElement. Adorners are rendered in an AdornerLayer, which is a rendering surface that is always on top of the adorned element or a collection of adorned elements.[1]

Adorners can be added in version X12 that are rendered on top of TextControl as expected.

Version X12 comes with fully functional ribbon tabs for the most typical tasks in a word processing application. The ribbon tabs are pre-defined components that can be bound to TX Text Control directly:

When starting the application, the formatting ribbon tab is automatically connected to the TextControl instance: 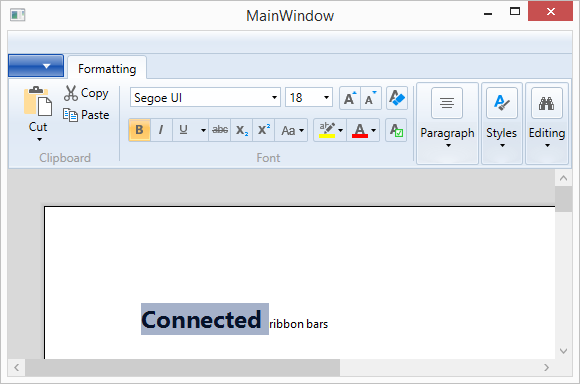 The ribbon tabs are completely customizable and extendable that helps you to integrate TX Text Control into your existing application.

TX Text Control X19 provides the possibility to retrieve and manipulate information of an existing MailMerge merge block. This enables the editing of filters and sorting instructions programmatically.