The following diagram shows the idea behind these blocks: 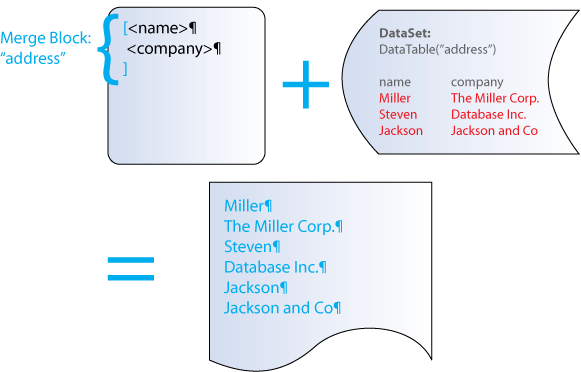 The merge block consists of a number of merge fields. For each data row of the passed DataSet, all fields in the block are merged with the given data of the current row. Additionally, the BlockRowMerged event is fired when a complete block is merged. In the event arguments of this event, the merged block is returned as a byte array in the internal TX Text Control format. This allows you to change the content of a merged block row. This approach can be used, for example, to change the background color of a table row to realize alternating table row colors

Another event is fired when the complete template has been merged. This allows you to save the document into a file when the append parameter of the Merge method has been set to false. In this case, the resulting documents are not appended to the same document.

Using the following code, you can load a template into the MailMerge component:

The Merge method is called to merge all fields in the template that are not part of a merge block:

To pass the data for the blocks, the MergeBlocks method must be called. The passed DataSet must contain a DataTable for each block in the template. The name of the block must be the same as the DataTable name:

Each time a block row is merged, the BlockRowMerged event is fired and can be used as shown in the following code example. The returned byte array is loaded into a ServerTextControl instance for further processing. The changed document can be passed back to the e.MergedBlockRow property:

Finally, the document can be saved in one of the supported file formats. The next two code lines save the merged document as an Adobe PDF document:

The next illustration shows the complete MailMerge class and it's properties, methods and events. It gives an overview of the possibilities using the MailMerge component. 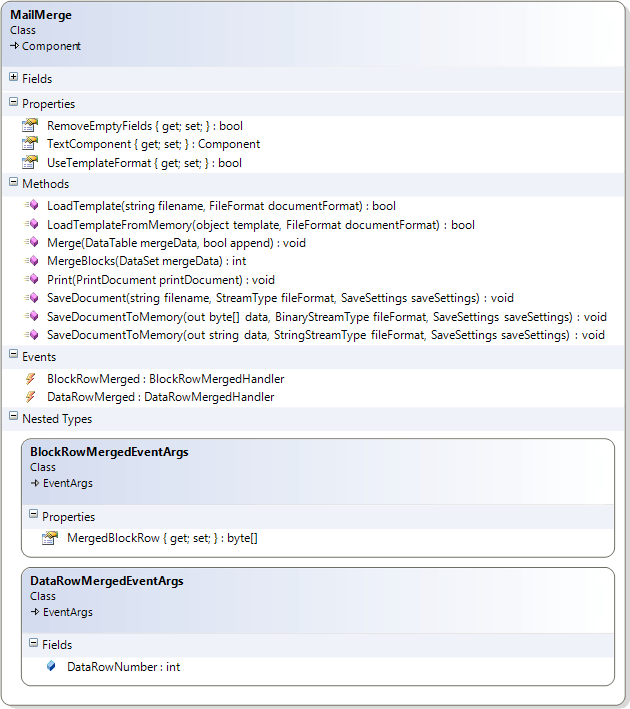 Try that on your own by downloading the TX Text Control Server for ASP.NET (incl. Windows Forms) trial version. It comes with a complete set of sample projects for Visual Studio 2005 and 2008 that shows the different functionality of our MailMerge component.

TXTextControl.Web is available as an ASP.NET Core component that can be used in ASP.NET Core Web Applications. This article shows how to use a model as the data excerpt file and to merge the created template server-side.

Database column names can be complex and confusing to end-users. This article shows how to display user-friendly names in the ribbon.

This article explains the different settings of the MailMerge class and how and when they should be used.

This sample shows how to use IncludeText fields to merge Excel documents into templates using MailMerge.