.NET Licensing: How to Use the Licenses.licx File?

In order to deploy an application with licensed components like TX Text Control, the EXE file must be licensed properly. Very often, we are getting requests about this mechanism of the .NET Framework that shows the confusion about it. This article explains how .NET includes the licenses of licensed controls into the exeutables. The…

Very often, we are getting requests about this mechanism of the .NET Framework that shows the confusion about it. This article explains how .NET includes the licenses of licensed controls into the exeutables.

The .NET licensing mechanism recommends to add the licenses to the EXE - the calling assembly. What happens in detail?

If you drag and drop a TextControl from the Visual Studio toolbox to a form, Visual Studio creates a licenses.licx file and includes the license information. This file is located in the same folder like your project file.

Important: The licenses.licx file does not include the license string itself. It just contains information about the licensed components. In case of TX Text Control (TXTextControl.TextControl), the following string is addded:

As you can see, it contains the namespace and control name, the assembly version, culture information and the unique public key token. Based on that information, the License Compiler (lc.exe) compiles the real license string that will be embedded into the executable assembly. The lc.exe is a small utility of the .NET Framework SDK which is used by Visual Studio during the build process. 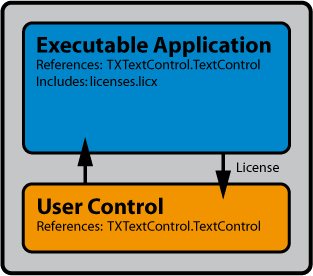 What if I am using TX Text Control in a user control?

In this case, you need to add the license to the main executable as well. Therefore, you can simply drag and drop a TextControl to a dummy form of the main project, so that the licenses.licx file and the references are added automatically.

After that, you can remove the TextControl from that form again. Or you can simply copy or create a licenses.licx file to the main project folder. In this case, you need to add a reference to TX Text Control manually as well.

This article should help you, if you get the following error message in Visual Studio: The following control could not be licensed: TXTextControl.TextControl This means that .NET is not able to find an appropriate license to validate the control. Generally, the license will be automatically included into the application and typically, you don't have to worry about licensing at all. In case, you are dropping a TextControl object onto a Form, TX Text Control creates an entry in the…

TX Text Control .NET for Windows Forms 14.0 introduced the ApplicationField class to manipulate MS Word standard fields like MergeField, Date or NumPages. All switches and parameters of these fields are represented by the Parameters property which gets or sets a string array of the available values. In order to create or edit such fields, you need to know the structure of these standard fields. In version 15.0, we introduced the FieldAdapter classes for the most commonly used fields:…