Sneak Peek X13: TX Text Control .NET This article, part of a series, describes upcoming features that will be part of the next version of TX Text Control. A release date is not known yet and will be announced separately. We are excited to announce new and improved functionality of the TX Text Control reporting engine…

This article, part of a series, describes upcoming features that will be part of the next version of TX Text Control. A release date is not known yet and will be announced separately.

We are excited to announce new and improved functionality of the TX Text Control reporting engine DocumentServer.MailMerge that will be released with version X13.

In previous versions, merge blocks were defined by two bookmarks with special names. This concept is flexible, but not very user-friendly.

Automatically, TX Text Control handles constraints and restrictions of blocks such as overlapping, nested levels and content. This new concept makes the handling inside the template designer TX Text Control Words more intuitive and fault tolerant which makes it very easy for non-developers to create templates, only with MS Word skills. 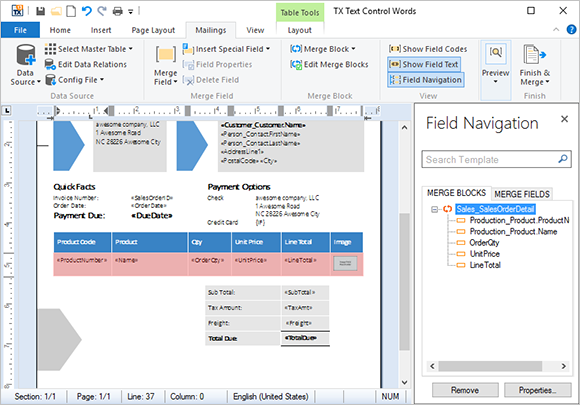 The merge blocks are highlighted automatically which helps to find the repeating blocks in a template. Nested blocks can be visually distinguished by using different colors or transparency for different block levels. The following screenshot shows three nested merge blocks:

Another advantage of the new merge blocks is that the start or end position of a nested block can be the same. This makes the insertion easier, especially for complex nested master-detail views. Thanks to the Field Navigation panel, it is very easy to visualize inserted blocks and contained fields:

Adding the merge blocks directly as a document element to the core of TX Text Control has another benefit: Performance. The performance of merging blocks within MailMerge increased up to 40% - a boost you can directly feel when previewing templates in the template designer.

It is very easy to test drive DS Server by requesting a trial token to test the functionality without any downloads. But in case you would like to test DS Server locally, you can download a fully-featured trial version for your own premises.

We are very excited to announce the release of our new product DS Server. Bring document processing, editing, sharing, collaboration and creation to any app on any platform.