This blog entry describes the results of a test that was preformed to benchmark TX Text Control Server for ASP.NET (incl. Windows Forms) and Aspose.Words (formerly known as 'Aspose.Word'). You can read the full text of the report below or download my latest white paper: 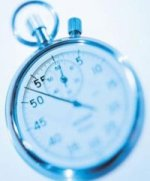 Centralizing word and document creation processes is a current trend in enterprise applications. Creating such business applications requires very stable and high-performance components that are able of handling thousands of documents per hour.

In this extended blog, I are going to describe benchmark and stress tests that have been performed with the following current server side word processing components:

These products have been specifically designed to run in server side applications and therefore do not have a user interface. All interactions are performed programmatically from application code, thus making them ideal for batch processing or printing large volumes of documents.

Aspose.Words (formerly known as 'Aspose.Word') itself only supports the MS Word format. Therefore, it is used in connection with Aspose.PDF to perform the typical application that is realized in the benchmark tests. Aspose.Words supports an interface to call Aspose.PDF directly from code.

Setup and Methodology of Benchmark

One of the most typical applications for server-based applications is the modification of previously made documents. The benchmark test consisted of three steps:

In this test, the same server environment was used for both components. The components were used in two different ASP.NET web applications that opened the document, replaced the strings and saved the resulting document back to the server.

The applications itself converted just one document per request. This simulates a typical scenario where concurrent users are triggering the document creation process in a web-based application.

We performed the test on a single processor Intel Celeron 2.0 GHz server with 512 MB RAM, running Windows 2003 Server and IIS 6.0. The server was connected to a local area network, interfaced by a 100 MBit network card.

The benchmark aims to illustrate how the components perform under minimum hardware conditions. Naturally, the faster the hardware, the faster the server based application will perform.

To measure the response times, we used the benchmarking tool Apache-Bench from the Apache Software Foundation (www.apache.org). Apache-Bench is a tool for benchmarking the HyperText Transfer Protocol (HTTP). It has been developed to quantify the performance of web servers and web based applications.

This especially shows how many requests per second the application is capable of serving. It allows a specific number of requests on a URL to be started. The number of concurrent requests are scalable as well. The benchmarking software runs on another server and sends the requests to the test server that contains the test applications.

Both servers are connected through a private 100 MBit local network. The tests were performed under identical conditions to ensure valid results. 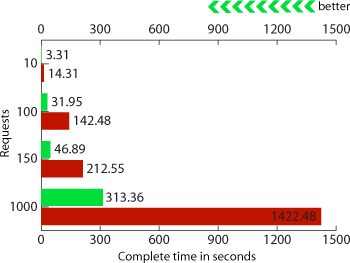 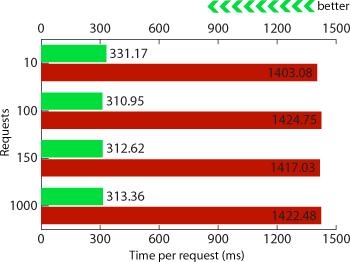 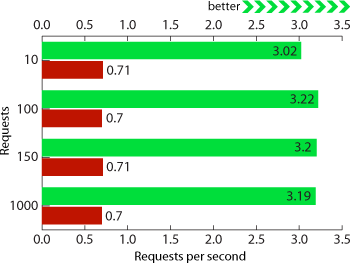 Performance is one of the most important aspects when choosing a specific server software.

These tests show that TX Text Control Server for ASP.NET (incl. Windows Forms) is about 4.5 times faster then Aspose.Words.

Consider a server-based application where the document creation processes are centralized on a server. A typical application is the automatic invoice creation in an online store or the creation of customized sales reports.

In these applications, performance is very important to serve high-level documents as fast as possible. This saves CPU time for other processes to provide a stable web-based application.

At the BUILD conference back in September 2011, Microsoft revealed the roadmap for Windows 8. Since then, developers and users were confused about what's possible and what's supported in the next Windows version. First of all, you can use TX Text Control .NET 17.0 to create Windows 8 (Consumer Preview) desktop apps without any known issues. Both, Windows Forms and WPF desktop applications are possible. So, if you want to get started with Windows 8 in order to test your existing applications…

TX Text Control implements some special mouse and keyboard assignments to assist with typical selection tasks. The following tables contain these specific assignments: Mouse Assignments and Smart Selections Mouse Action Reaction of TextControl Click Moves cursor to point of click or selects an image or text frame. Click and Drag Selects text from point of button down to point where button is released or moves an image, text frame or OLE object. Shift + Click Extends the selection to the…

XBAP is a very smart way to deploy full .NET Framework WPF applications in the browser. With .NET 3.5 and 4.0, that means MS Internet Explorer and Firefox. Of course, TX Spell .NET for WPF and the dictionaries can be deployed as part of an XBAP application as well. The following tutorial shows how to accomplish this task. Start Visual Studio 2010 and create a new WPF Browser Application. Build a TX Text Control based application by following this tutorial from the TX Spell .NET for WPF…